We work only with experienced service providers and specialists. In the field of turbine repair we suggest contacting Ramūnas Čapkauskas - MANOSERVISAS.LT

Many consumer market players are looking for the cheapest option to buy a product or get a service. Of course, everyone wants to pay as little as possible, hoping for the best quality investment or purchase.

Garages and constantly braking cars that require regular maintenance checks are no exception. Most of Lithuanian road vehicles have turbines and there is no technology that does not degrade. What happens when turbine breaks? We see it by looking at engine RPM and we can sense the attraction, more precisely, its absence. 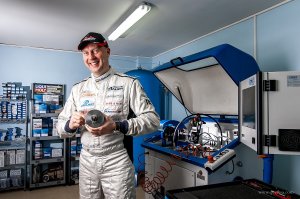 Sometimes it is mistakenly believed that a turbine breaks itself: just like a mechanism, no dependant on external elements and separate parts and not dependant on constant use and wear. But, unfortunately, this is not the case: the turbine failure can be caused by an infinite number of other factors. As a rule, it happens that the defect of a turbine is simply the result of another failure, or failure of proper maintenance/care.

"Most of the broken turbines are caused because of little attention to cars: timely changes in lubricants, diagnostics and lifestyles from failure to failure," says Ramūnas Čapkauskas, owner of the Lithuanian sports champion and turbine service "ETA Servisas" - " The biggest problem is the desire to deal quickly and cheaply, not fully analyzing the failure, in order to not only remove the broken part, but also the very cause of the failure. Some short-term strategy with regard to car maintenance is really not effective. It is not enough to remove one turbine and replace with another one - it will not solve the problem - it will only delay search of a cause which in turn may result in higher expenses. It is necessary to carry out full automobile diagnostics and, once the turbine has been replaced, preventive measures should be considered. This is what I always repeat to my service customers. If we want the technique to serve us, we need to take care of it. ".

REPLACING AN OLD TURBINE WILL NOT SOLVE THE PROBLEM

In Lithuania, people who come to the garage are not inclined to check all existing problems found in the car - they just want to get it serviced as soon as possible and leave. The problem can re-occurs after a while after changing the turbine, if the true cause of the failure has not been eliminated. Therefore, a client will eventually come back to the garage to check the car again. Ramūnas Čapkauskas: "There is such a category of service centres (garages) where the broken turbines are replaced with a new restored/refurbished one. But this does not mean that the root cause of a problem has been solved - it is solved just temporarily, failing to cure the cause of the turbine failure will eventually break it again. Here's the mistrust not only of masters, but also of car services. On the other hand, I perfectly understand why the client feels tricked – he usually is.

EVERY OWNER CAN PREVENT THE TURBINE FAILURE HIMSELF

Ramūnas Čapkauskas: "The terms and dates when to change car oils or other liquids necessary are not intended to the garage service providers, but to the owner of the car. Even after the turbine has been restored, it should not be forgotten about all other elements of the car that ensure its smooth operation. " According to technicians, after taking care of the car turbine, it is necessary to change the engine oil filter, the oil itself, wash the intermediate air cooler and connection hoses, air filter, oil supply system pipes. Along with all this, it's a rather short list - it is advisable to clean the EGR, crankcase, breather filter. The list is straightforward, and it seems like most problems can be avoided just by taking a responsible attitude towards cars - after all, all the technology that are not properly cared for will end. You should not only responsibly choose measures for maintenance of our cars, but also services/garages in which we will repair them.